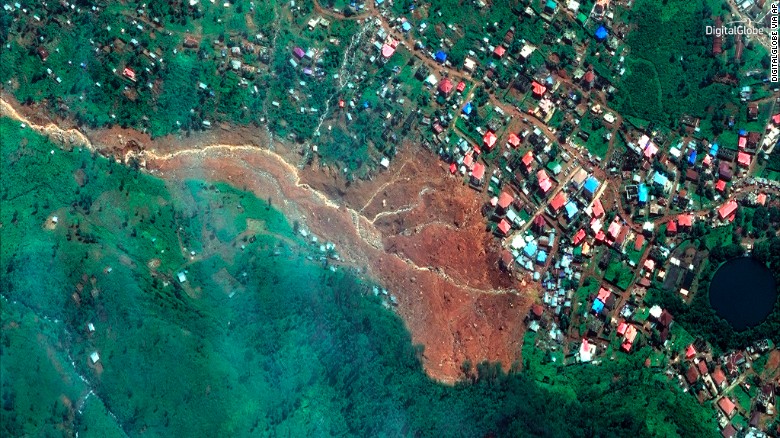 I was in Freetown when the August 14 mudslide happened. The morning of the disaster, I went to breakfast and saw a friend who, unaware of the extent of the human toll, had received a call from a co-worker. The co-worker reported that one of their colleagues’ house had collapsed. Children had been killed. As news trickled in from various sources, it became clear that this was not a tragedy striking a single family; rather, it was a tragedy affecting thousands: many were wounded, killed or displaced by the mudslide. The rains were intense that morning — and had been in the days leading up to the disaster. Of course, it’s the rainy season, and Sierra Leone is notoriously one of the wettest places on earth during these months, but according meteorological data, Freetown’s residents were seeing three times the average rainfall for August.

Late that morning,  Idris (the car hire driver) and I headed to Bo on the mountain road (the road one generally takes from the West End of Freetown to the provinces to avoid traffic in the city’s center and the east end). Idris turned to me and said, “It must be very serious for so many ambulances to be here. So many must have died.” We watched vehicle after vehicle rush to the site of the mudslide, but still we weren’t sure of the impact. We were stuck behind a line of cars and motor bikes, as emergency vehicles rushed to the site.

Having lived in the city during the 2000s, I had to admit that I was impressed by this — even as I worried about the people perishing under the weight of the mud. It appeared that whatever measures had been put in place during the Ebola emergency — the use of emergency vehicles and manpower, in particular — were being leveraged to respond here. (Later, when I was leaving Freetown, I met a worker from public health UK, who had been helping with disaster response since the Ebola crisis. He very cautiously complimented the response while also noting that the city had a long way to go in terms of developing and sustaining systems to prevent and respond to environmental disasters like these).

The mood on the road to Regent was somber. Men hung out of the windows or off the backs of trucks in yellow and white plastic suits, while concerned onlookers on foot watched them pass by. As we passed the slide itself, we looked down into the valley, where I spied a pickup truck submerged to its roof in muddy rushing stream of fast-moving water.

By the time we had reached Bo, we had heard that hundreds had died, and hundreds more were missing, confirming our fears as we passed the crowds that had gathered along the road.

As I watched and read the news about what was happening in Freetown, a narrative was developing about factors leading to the landslide, steps that could have been taken to prevent it, and the inadequacy of systems to respond to emergencies like these:

(1) Deforestation. Although the British expert I met on the way to Lungi said he had heard too little about deforestation, I had heard quite a bit about it in the long list of ‘factors causing the mudslide’. Who was responsible for it, and how they were to be held accountable for its impacts– and for reversing its course? I’ve been searching for data about the extent of deforestation and its causes. I have found little in the way of data, but I will share what I have learned in my next post.

(2) Poor urban planning. This is linked to deforestation, wartime and post-war rural-urban migration, and a longer history of spatial segregation and securitization starting from the colonial era. “Land grabbing” in recent years by national and global elites, and failure to regulate construction of houses by the rich and poor, have also been implicated. Lansana Gberie writes about this.

(3) Emergency warning systems. It had been raining heavily for three days; why hadn’t meteorologists and emergency personnel asked people to evacuate their homes? This seems to be an issue of prediction, which I would like to think through in relation to other heavily politicized considerations about projections (like those for Ebola). Hoping that’ll be another blog post.

(4) The tyranny of lessons learned. There was a smaller landslide in 2015; why hadn’t the government learned and put in place better systems to mitigate its effects? (See also: systems developed during the Ebola crisis; deforestation in protected areas; unregulated development.)

(5) The problem of preparedness. In the title of this post, I also refer to preparedness as a “problem.” As the city has grown to support business interests (e.g. the widening of Wilkinson Road, the rapid development of Lumley Beach, the relocation and construction of the US Embassy in the hills, etc),  it appears that billboards urging personal responsibility have also proliferated. Signs urging residents to contribute to environmental stewardship by not polluting or cutting down trees for charcoal abound. (of course there are none about building mansions or embassies in the hills, or making government accountable for protecting forests). For Ebola, the most striking sign in Krio (for me) was na mi we go don Ebola (Ebola stops at me or It’s me who’s going to finish Ebola). The prominence of ‘individual responsibility’ approaches to systemic problems is not new — nor is the critique of it. But the appearance of these signs at points of crisis have forced me to think about the audience for these billboards, the work they are supposed to do, the political projects they serve (or don’t).